Kiss me. Kill me. The Candy Wrapper Killer. / Chapter 02

*Due to technical difficulties, Part 02 to "Kiss me. Kill me. The Candy Wrapper Killer" will not be posted till later this weekend.

But please enjoy other wonderful stories from the "Fearless Fiction Femmes Fatales"!! 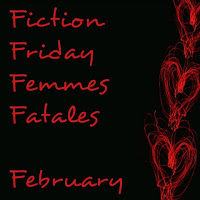 Kiss me. Kill Me. The Candy Wrapper Killer.

[Fiction Friday Challenge #03 - 1st Draft - 'February Love"]
*Prompt: When was the last time you looked into someone’s gorgeous eyes? Maybe they were sea green and seemed to have all the secrets of the world behind them? What would happen if you had a chance to know this person intimately? Then you find that person has a dark secret that would bring your perfect but lonely life to its knees.


This will be my first attempt at writing a longer story for Fiction Fridays. Below story will continue for the next 3 Fridays. Each week a new prompt will challenge and guide the story further. Hope you will stay tuned! Enjoy this week's Friday Fiction.


“That will be $4.20.”
The bright, buzzing fluorescent lights overhead kept flickering, making her badly platinum dyed hair look almost like an…angel.
“Hey! Sir? That will be $4.20!”  The gum-chewing, bored-looking, bad-attitude-wielding, eye-rolling angel spoke again, this time with some irritation.
“For a pack of gum and chips?” Rez asked incredulously, eyeing the angel shrugging her shoulder and Rene, the owner, sitting further down reading a newspaper, ignoring both of them. Rez snorted and pulled out some change and dropped it on the counter.
Grabbing the gums and chips, he leaned over to ask. “You don’t even know the irony of the 420, right?” Seeing a blank stare from the angel, he laughed, shaking his head, Detective ‘Rez’ - Ramirez Jesús De La Cruz of the Toronto Police 14th Division - walked out of the convenience store into the cool morning air on Spadina Street. Still chuckling, he looked down at his watch! Damn! It was 4am. If he rushed now, he could get home in time to have breakfast with his son before he left for school.
Taking a big swig, he grimaced from the taste of the stale coffee. Eyeing the styrofoam cup of dark poison, he reluctantly swallowed the rest. Fuck this shit! It was old as fuck but he needed something warm, and he needed the caffeine. Ok. He needed mostly the caffeine.  Rolling his empty coffee cup into a ball, he started passing it from one hand to the other, imitating play-by-play hockey game he had watched a week ago. Rez eyeballed the garbage can to line the shot, and with a flick of his wrist, he hollered, “He shoots, he scores…!.” The rolled up coffee cup bounced off the edge of the can just as his phone vibrated.  He swore. Just like his hockey team, he couldn't even score! Lifting his mobile up to look, it was his partner, Ronald Wong calling. “Wong. I hope this can wait. I’m on my way home to get some beauty sleep!” Rez answered half jokingly.
“Rez, another call came in. They found two more bodies. They think it matches the other cases we’ve been working on. The Captain wants us to go down to check it out. Where are you? I’m on my way to the car now.”
Fuck this shit. Rez knew it was going to be another long day.
“Yo’ Amigo. I’m down the street at Rene’s.”

Accept for the occasional beeping coming from the car’s internal police radio system, both Detectives was quiet, lost in their thoughts thinking of what was ahead.
Rez realized if these deaths were linked to their cases, it would be their 5th, with the body count now up to ten. Ten in two weeks! Fuck this shit!
Rez had gone through his notes and the autopsy reports. All the victims were couples. They had died from wounds they had self inflicted and on each other. They all exhibited small punctures with a bluish halo tinge around it and all of them had usually high levels of Dopamine, Oxytocin, Norepinephrine in their systems. The Medical Examiner had noted that it was odd to see those chemicals at such levels as it was only naturally produced in the body during, and for a short period of time, after sexual intercourse - the technicians had joked and called it ‘Death by Love’ - further, the medical examiner couldn’t explain what may have caused the small puncture wounds, or even the bluish bruising around it. She had sent a sample for further analysis to their sister-lab in Ottawa hoping that their new machine could come up with more answers.
‘Death by Love’? Was it a new drug on the street? Last year’s craze was Bath-Salts! What’s causing the victims to hump like crazy bunnies, then go berserk and start hurting themselves and killing each other?
What the hell was happening? Rez was worried.  He wasn’t sure what they were dealing with.
Fuck this shit!
----

Nodding a hello at Rez and Wong, the investigative officer in charge named Winch started reading off his notes.
“The two vics were found D.O.A, possibly knife wounds to the neck. One male, the other female, both, if I was to guess, to be juveniles, possibly 14, no ID’s on them. Both suffered from lacerations to faces, arms and the chest. Cause of death? Take your pick. We also found a golden candy wrapper by the male vic’s body.” Winch stopped, to look up from his notes at Rez and Wong. “I heard talk about your case and the candy wrapper that's when I went on the bull-horn to your office. It’s a ‘dead’ match to your case, eh? You get it?” Winch laughed at his pun and handed the plastic baggy with the candy wrapper.
Rez stared, not amused.  Turning, he looked at Wong slipping on gloves to inspect the bagged candy wrapper closer. Turning back to Rez, Wong nodded, looking grim.
Fuck this shit.  It was the same type of candy wrapper found near all the bodies. Rez pulled out his gloves and walked towards the bodies. Kneeling down to get a closer look, his trained eyes noted the half, opened eyes of both of the victims. He bet that somewhere, the victims would both have the same bluish puncture marks on them, but he would need the M.E. to confirm that.
The bodies still looked fresh. They looked young. Fuck this shit!

"Who found the bodies?"

More paper shuffling from Winch, "No clue, A call came from a public phone to the dispatcher."
Shooting a tired look at Winch, Rez waved him closer. “It’s a match. Can you send all the evidence to the 14th Division, including the M.E.’s report? Who’s the M.E. for this?”
Looking down and shuffling though his notes, Winch replied, “Dr. Hammond. A Dr. Cassandra Hammond.” Rez nodded his thanks and stood up to walk back to the car, letting Wong sign off on the paperwork.
Dr. Cassandra Hammond. Cassie, his sweetie. He’d been have dating Cassie for about two weeks now.
He smiled, remembering how they met.
She had come to the 14th Division for a meeting with his Captain. He and Wong had accidentally piled into her and her box of files in the hallway. Half smiling, he remembered how Wong, while helping pick up her files had tried to sweet talk her, trying to get her name. She coolly answered, after eyeing Wong up and down, noting his badge, "Detective, I am Dr. Cassandra Hammond, the new Police Chief Medical Examiner, and I am here for a meeting with your Captain!"
Laughing at Wong’s painful expression, Rez turned to see grey, beautiful eyes, sparkling with humor, staring back at him. Rez heart just about stopped and his voice got caught in his throat. Her heart-shaped face held a small little smile, which she quickly hid behind a cough and a hand. Looking back again, she gave him a little half smile as she walked away…no, sashayed away, giving him full view of her long strawberry-blond hair, long, tanned legs in heels and a body to die for. Rez knew he was in trouble. A week later he asked her out, and they have been inseparable ever since. He was smitten. S M I T T E N!
Turning back to yell at Wong to hurry, Rez stopped in his trek and stared. Right above the tree line, near the crime scene, he saw someone....something....floating and glowing! Wings? What the hell? Floating and glowing? With wings? Blinking, he looked again and the thing had disappeared. What the fuck?
Stripping off his gloves, he reached into his pockets and found his gum. Ah…fuck this shit. It wasn’t a great day to quit smoking anyways! Stuffing the gum back in his pockets, he grabbed his cigarettes instead and waited for Wong to finish up with Winch.
Floating, glowing freaks with wings! Death By Love! And they call me nuts! He though, sucking in deep his cigarette.

Brunette hair flying in all directions while long, toned legs held firm the man beneath her as he strained against her in the backseat of his car, his hands digging painfully into her sides. But she didn’t mind it. She loved the pain. Looking down at the stranger she had picked up at the bar earlier, he said his name was John, while she had whispered in his ear, that her name was Candy.
She sighed. Looking down again at John’s flushed face and harsh breathing, twisted from the sexual pleasure. She wondered briefly if he'd have any family that would miss him? Mourn him?
Unhurriedly, she moved her gloved hands up her hot skin, exposed between her unbuttoned shirt to the nape of her neck, where she carefully slid under her wig, to pull out a syringe.
Suddenly, the man called John began bucking wildly underneath her. Tenderly, she pushed the man’s face aside and nonchalantly pushed the syringe to inject its contents into the man’s soft neck. Eyes widening and with labored breathing, John stopped moving. The man had been paralyzed.
Twisting to grasp her evening bag on the seat beside her, she slowly took out another syringe, this time a little bigger, a little wider, with a longer and thicker needle. Turning the man’s head back and holding it firmly, she plunge the syringe into the center of the man’s forehead forcefully. There was a sickening wet, crunchy sound.
A slight widening of his iris, the only indication of life, John began to die.
Focused, deliberate, she pulled on the inner chamber of the syringe, as golden, yellow liquid began filling the tube quickly. Extracting the needle out, she pulled the chamber out of the syringe and shoved a cap on and tightened it. Spying a pen at the back, she looks down at John again, “You don’t mind me borrowing this little old pen, do you, sweetie?” She asked smiling.  Taking the pen, she scribbled hastily on the label -‘LUST”. Looking at the golden vial, all she had to do was refine the pure liquid further at her lab and her product will be ready for the market! In fact, her newest client will pay her handsomely for this. She giggled, pleased.
Pushing her dress down, she freed herself from John and opened the car door. Looking back, to make sure she left nothing behind, she blew a kiss to the dead John!
As heels click on gravel road, Candy strutted out from behind a secluded alley, her phone began to ring. Reaching up to snatch the brunette wig off her, she answered her phone, “Dr. Cassandra Hammond speaking.”


Note to Readers:
If you'd like to read more of Friday Fiction, please join us - "Fearless Fiction Femmes Fatales" - and read up on my other amazing cohorts of writers every Friday!